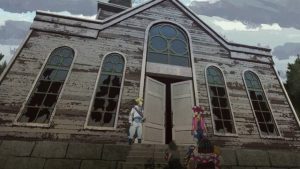 If there was ever a show that qualified as a tweener, it’s Appare-Ranman!.  In a better season (or at least a full season) I probably wouldn’t have blogged it (though I suspect I would at least have watched it).  It’s one of the better P.A. Works originals in a while, but that’s a mighty low bar.  Those have ranged from the mediocre (Iroduku, say) to the truly awful (Glasslip) as the studio has fallen far from its creative zenith.  About their only real TV standout in recent years is Uchouten Kazoku, and the credit there surely goes largely to Morimi Tomihiko, though the adaptations themselves were excellent. 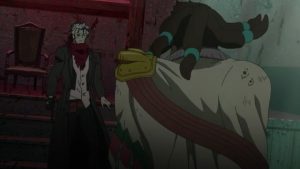 Appare-Ranman has something of Fugou Keiji to it, in that it went in a similar direction that proved frustrating.  It moved away from what made it modestly distinctive and pursued an ultra-conventional, comic book narrative course.  It was mostly entertaining in the process – less so than The Millionaire Detective for me – but ultimately a lot less interesting for it.  Most of the final few episodes could have easily taken place in Japan as America – it may have been wearing (old) western clothing, but it was a pretty generic action show at that point. 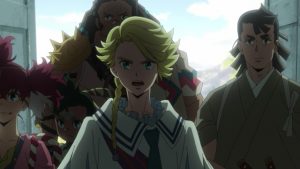 In fact there was a bit of Silver Streak to this finale – it even took place in Chicago, though they got the station name wrong – but what was designed to be a grand and epic climax kind of felt anti-climactic to me.  Appare stopping the train with the car was pretty out there, and Gil’s final showdown with TJ and Dylan was so anti-climactic that I wondered if there was a missing scene or something.  Gil trounces everyone with his bear hands, then TJ and Dylan – who Gil had already proved himself manifestly superior to in combat skills – basically beat him up?

As for the denouement, Appare and team do win the race – though it hardly seems to matter much at that point – and ultimately, everyone but Kosame decides to stay in America (well – Al and Sophia do go back to Europe).  You kind of figure Kosame was going to stick around after all that, which I frankly found disappointing because unlike Appare he did have legitimate reasons for wanting to return to Japan.  But I suppose that would have been a depressing way to end what was basically a lighthearted fantasy. 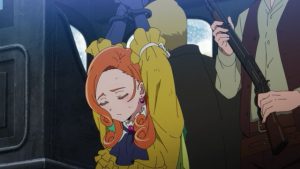 To the extent it worked, Appare-Ranman worked because of two things – a pleasingly fanciful setting and a mostly likeable cast.  Kosame and Hototo were the best of them but it was generally a pleasing group, though Gil proved to be a pretty boring stock villain.  I wish the unusual (for anime) setting had been utilized more effectively in the second half of the series, but as I said things went over pretty conventional and that element kind of got lost.  I did like the characters a lot though, and that at least kept the show watchable.  It’s not high praise I realize, but in this trainwreck of an anime season that was enough to make Appare-Ranman! stand out.