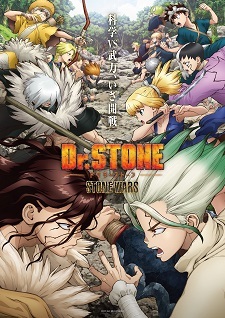 The 11th and final episode of the second Dr. Stone anime season, Dr. Stone: Stone Wars, ended with a sequel announcement following its broadcast on Thursday. The sequel will continue the story with the Daikoukai Jidai-hen (Age of Exploration) arc.

Synopsis (Stone Wars)
Senkuu has made it his goal to bring back two million years of human achievement and revive the entirety of those turned to statues. However, one man stands in his way: Tsukasa Shishiou, who believes that only the fittest of those petrified should be revived.

As the snow melts and spring approaches, Senkuu and his allies in Ishigami Village finish the preparations for their attack on the Tsukasa Empire. With a reinvented cell phone model now at their disposal, the Kingdom of Science is ready to launch its newest scheme to recruit the sizable numbers of Tsukasa's army to their side. However, it is a race against time; for every day the Kingdom of Science spends perfecting their inventions, the empire rapidly grows in number.

Reuniting with old friends and gaining new allies, Senkuu and the Kingdom of Science must stop Tsukasa's forces in order to fulfill their goal of restoring humanity and all its creations. With the two sides each in pursuit of their ideal world, the Stone Wars have now begun! [Written by MAL Rewrite]

Weekly Shounen Jump bega serializing Riichiro Inagaki and Boichi's post-apocalyptic adventure sci-fi manga in March 2017. Shueisha published the 19th volume on January 4, with the 20th volume scheduled for release on April 2. Dr. Stone has a cumulative 8.4 million copies of its volumes in circulation.

VIZ Media simulpubs the manga digitally with the Japanese release through its Shounen Jump platform. The 15th volume shipped on February 2, with the 16th volume planned for an April 6 release.