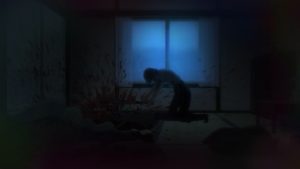 Well, this was certainly quite the trip down memory lane.  It’s been seven years since the last Higurashi no Naku Koro ni anime, but I was watching them long before that.  Before I ever started blogging anime, in fact.  I never played the games that started the franchise or read the manga than spun off them, but the anime version is as familiar as the back of your hand at this point, and as comfortable as your favorite coffeehouse on a lazy Sunday morning. 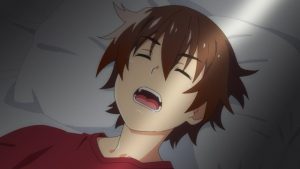 As I noted in the season preview, the anime versions of Higurashi have ranged from really good to (rarely) awful and everything in-between, but most have been at least pretty good.  A lot has changed with this version – a director new to the franchise (the very competent Kawaguchi Keiichirou) and a new studio, Passione (after DEEN).  But it’s still Higurashi, most importantly in terms of tone, and the cast seems to have all returned with their familiar overacting approach.  And Kawaii Kenji is back delivering the music, which may be the most important continuity point of all. 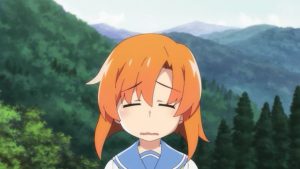 I suppose I have to assume for whatever duration I cover this series that some readers will be unfamiliar with the story.  That means avoiding spoilers (including in the comments, thank you), which is well and good, but the nature of this reboot makes it a little awkward.  It seems pretty clear from the narrative winking at the audience that it’s assuming a degree of familiarity which will leave new viewers perhaps a bit lost.  I would hope anyone would pick up on the fact that something is seriously off in seemingly peaceful Hinamizawa Village, though. 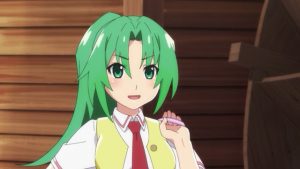 What’s changed?  Well, the pacing is a bit brisker than I remember it – I don’t think the original anime covered this much territory in the first episode.  The look is somewhat different, a bit softer and brighter, and the character designs are cuter.  But the overall feel of the piece is more familiar than different.  We have transfer student Keiichi arriving in this mountain hamlet and quickly making friends with local girls Rena, Rika, Mion, and the supremely annoying Satoko.  I seem to recall there being more focus on Keiichi’s troubled history and social disconnection, whereas this time he’s already pretty well-integrated with his friends (and an odd bunch they are). 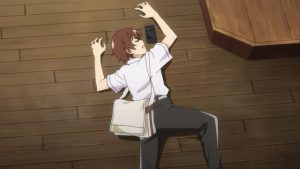 Sticking to what the first episode reveals or directly suggests, there was a confrontation over the planned construction of a dam, which would have flooded the village.  Something nasty happened at the local dump which Rena loves to frolic in.  There seems to be a code of silence within the village about this, but Keiichi stumbles on a stack of magazines at the dump which reveal the details.  That spells trouble – in more ways than one (and more than can be explained by what we already know).  Using the original OP over this scene at the end of the premiere was a nice touch. 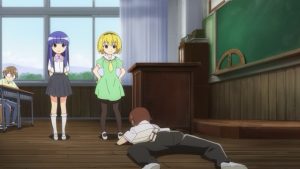 All in all, I’m fairly encouraged.  This was nicely done – no clunky transitions or laboured exposition (which would be especially problematical with this series).  It felt more like good Higurashi than bad Higurashi.  I’m guessing based on the pacing that we’re looking at a single cour here, but I don’t see that as a problem – some versions frankly would have been better if they’d been shorter, and depending on how you lay it out you could spin a pretty good Higurashi story in a short OVA series.  I don’t see any reason to think the 2020 version won’t work just fine, and if you are a new viewer, stick around – things do get quite interesting…