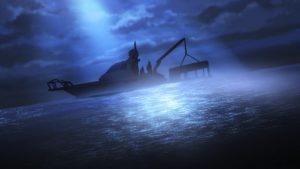 While this is nominally a first impressions post, oddly enough it’s also a review of an anime that came out four years ago.  Turns out Noblesse had an OVA called “Awakening” in 2016, a fact that I never knew until this week.  And since the first episode of the series assumes you’re familiar with the events of the OVA (which you’d call a prequel now, though I don’t see how you could when it was made) I figured I’d better watch that first.  And since the first week of a new anime season is always (with the exception of pandemic-ravaged Spring and Summer 2020) frantic, I figured I’d better combine my impressions in a single post. 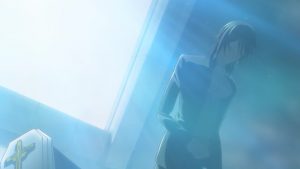 While I admit my expectations were relatively modest, I liked Noblesse more than I thought I would.  It’s worth noting though that I preferred the OVA to the series premiere on the whole – it was more stylish and had considerably more narrative momentum.  But an OVA has to tell an entire story while a first episode is just that, a setup – so I won’t judge too harshly there.  I will say the visuals for the TV are pretty mediocre by Production I.G. standards but that’s not a deal-breaker for me.  Most of the cast and staff has carried over so in theory there should be a fair bit of continuity. 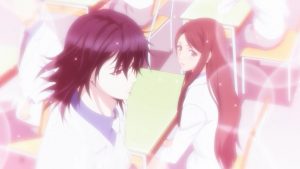 I haven’t read any of the manhwa this is based on, though to be honest I was expecting something closer to The God of High School (insipid) than Kami no Tou (fantastically uneven. but at its best brilliant).  In principle I certainly support manhwa making their presence felt in anime, though apart from Tower of God I’ve yet to read one that really grabbed me.  This was pretty good, though – hardly an original setup but well-executed, with fairly interesting characters. 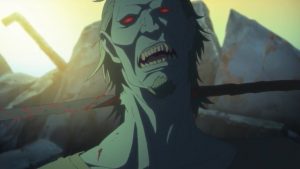 Basic premise is that a super-powerful being called the Noblesse – Cadis Etrama Di Raizel to his friends – has been awoken after an 800-odd year nap.  He’s the strongest of a race of immortals who once ruled humans as demigods.  I’m not 100% clear on exactly why he woke up but his servant Frankenstein has been waiting for him.  He’s set up shop as the principal of a high school in Korea (again, not quite sure why).  There’s also an organization called “The Union” which consists of supermen but perhaps artificially created rather than supernatural (I’ll get back to you) who are hunting for the Noblesse.  One of them, M-21, is one of their experiments turned rogue, and he ends up fighting with the good guys. 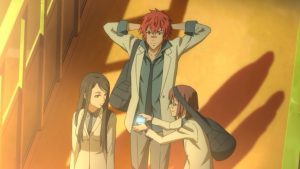 What kind of made this click for me, especially in the OVA, was the dichotomy between Rai’s (as he eventually comes to be called) existence as a God and his silly interactions with a pair of kids from the school.  That’s hardly groundbreaking but it was pretty well-done, and the modern teenagers don’t come across as either useless or overpowered to an obnoxious degree.  I wouldn’t say I was blown away by Noblesse but I was entertained, and my feelings towards it were surprisingly affectionate after the premiere.  If it can raise its game closer to the “Awakening” level in upcoming episodes, this series has a shot to stick around for a while.