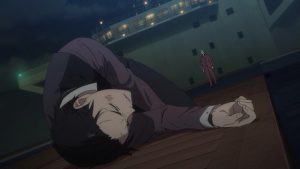 Fugou Keiji is definitely playing the “suspension of disbelief” card more and more as it progresses, but I think if you take the series in the spirit it’s intended that’s not such a problem.  Basically Daisuke is Batman – super-rich with parent issues and a surly temperament, with an arsenal full of ridiculous gadgets.  Hell, he even has a batsuit.  That may not have been what the series looked like it was going to be after a few episodes, but that’s definitely the closest thing it has to a real identity. 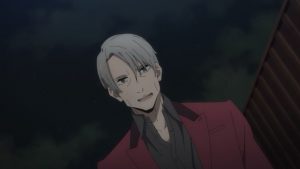 It’s the anime-original character, Katou, who gives the series its twist on formula.  In addition to having his own arc – one of equal importance with Daisuke’s – he basically turns The Millionaire Detective into a hybrid between a superhero comic and a buddy cop show.  And that works for me, because these two have a winning odd couple chemistry.  I find Daisuke to be a pretty big douchebag, but that hasn’t really changed from the beginning.  And Katou manages to soften him up to a certain extent. 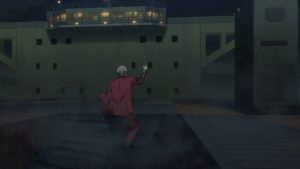 I would be remiss in not noting that fact that the evil Frantz Weinski (ROFL) is played by none other than Hirata Hiroaki, who’s having great fun camping it up in the role.  Hirata is one of my absolute favorite seiyuu of any era, and we hear far too little from him these days as anime has thematically evolved to a place where are few roles for him to play.  Frantz is kind of a throwaway part really, but there are no such things where actors like Hirata are concerned.  He gets every millimeter of milage to be had out of Frantz, and pretty much steals every scene he appears in. 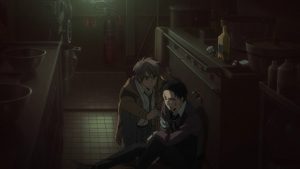 Stipulating for the record that all the tech on display here is pretty preposterous, there’s some fun stuff to see.  Suzue’s drones are cool – they get shot down by Frantz of course, but the real drones are stealthily hidden inside, waiting to sneak onto the cargo ship after the outer shells have been destroyed.  What I don’t get, though, is why the drones ability to communicate info back to Suzue isn’t affected by the Adollium, which blocks every other form of communication completely.  Dissecting gossamer, I know. 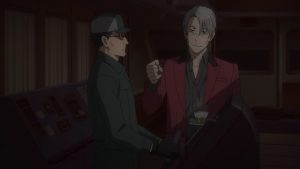 I’m glad this didn’t come down to Katou regaining the ability to kill people being the triumphant moment – though the original novelist would probably have loved that.  Hell, Daisuke didn’t even kill his father when he confronted him on the bridge (that tiny coolant hose sure was important)l, but rather planned to take him into custody.  And when the chopper arrives he even relents and lets Katoun rescue Frantz and the zaku rather than leave them to die, though I’m pretty confident Daisuke would have done just that if Katou weren’t around to lay the guilt on him.