You will never be the same again

The collector’s edition of the ecchi FPS Gal Gun Returns will only be sold at Funstock with a limited quantity available.

We have written about the remaster of the original Gal Gun game in a previous article. Gal Gun Returns follows a young man who suddenly gets popular with the ladies. He gets confessions on a daily basis, so he shoots them with a pheromone shot to fend them off. He already has a girl he likes, so he needs to protect himself so he can be with her. The remaster takes the first game and adds more girls, game modes, CGs, and collectible panties. Most DLC costumes will also be pre-loaded into the game, so you won’t have to download it separately.

Gal Gun Returns Birthday Suit Collector’s Edition is a limited edition version of the game. Only 3,000 copies will be available and you can choose between a Nintendo Switch physical copy, a Steam key, or Xbox key of the game. The codes will be delivered via email in time for the game’s launch. The items in the collector’s edition include “safety goggles,” a three CD soundtrack, a one hundred page art book, titled The Sexy Chronicles of Gal Gun, an alternative cover art insert, a set of six metal pins, an anniversary coin to celebrate Gal Gun’s tenth anniversary, six art cards, and an art box to contain it all. 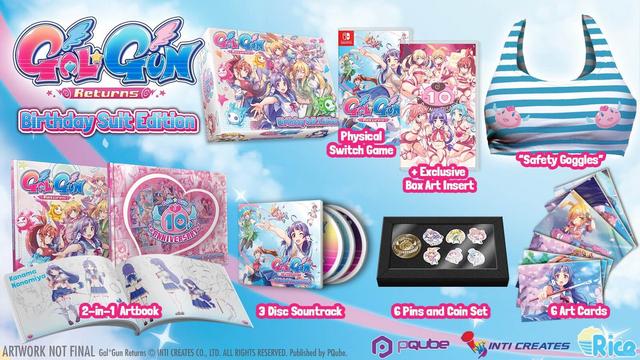 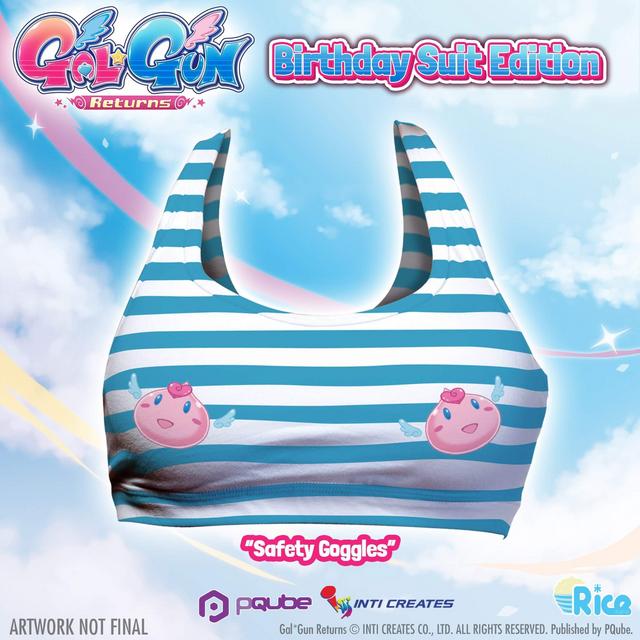 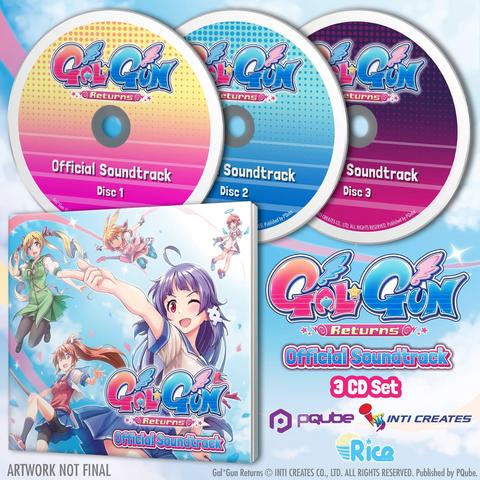 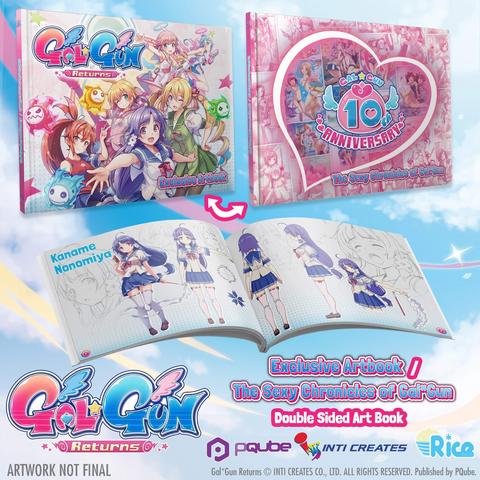 Perfect from protecting yourself or friends and family from unexpected lewdness in the vicinity.

A set of 3 CDs, which includes all the music, voice and background tracks from Gal*Gun Returns.

The Sexy Chronicles of Gal*Gun showcases art work from Gal*Gun Returns, as well as a flip side filled with lewd imagery from the entire franchise, including some unreleased sketches and designs, from 2011 to 2021!

We know that our fans love exclusive things, so we asked Itou-san, the mastermind behind the design of the Gal*Gun franchise, to create a piece of art especially for Rice Digital! This is will be featured in an insert that you’ll be able to use to replace the standard one on the Switch, and that nobody else is getting! The teams at PQube and Inti Creates put their heads together to get this concept in line with the Birthday Suit Edition!

Set of coin and pins

In a tidy box, you will find the metal pins of the 6 heroines of the game in their chibi style, as well as a commemorative coin with the special anniversary logo designed just for the occasion! The coin is a golden metal, 50mm and printed on both sides. Each pin is 30mm, and everything is on a foam background to keep it safe in transit! 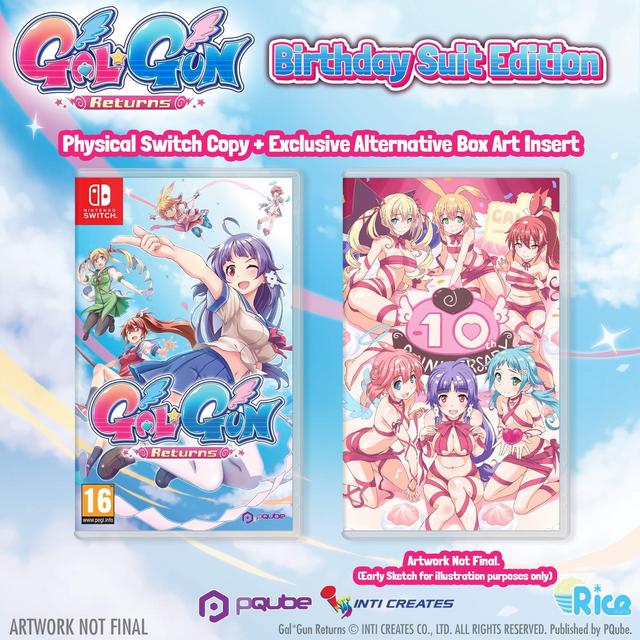 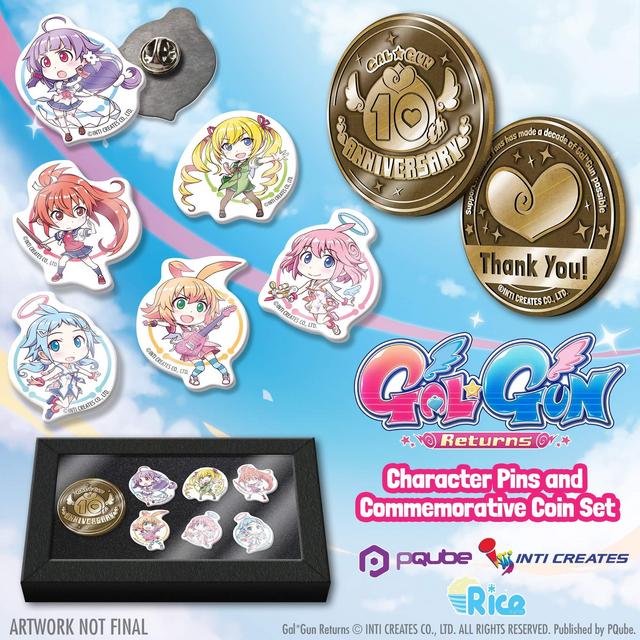 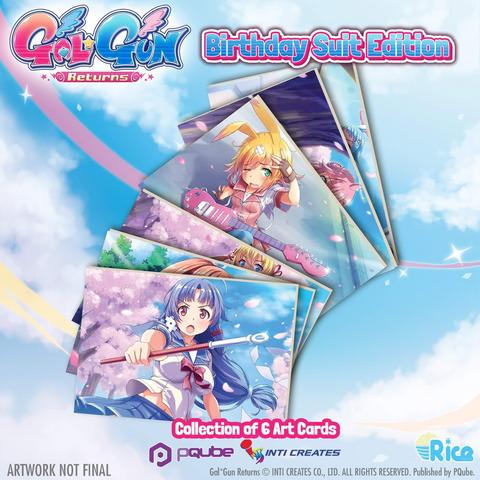 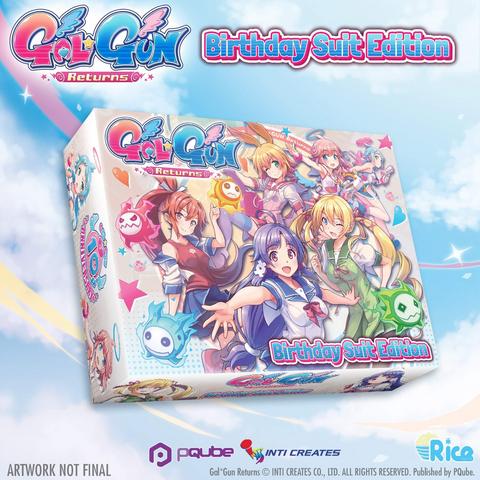 The Gal Gun Returns 'Birthday Suit' Collector’s Edition is set to release on February 28th, 2021. You can pre-order the collector’s edition of the Nintendo Switch version (which can be bought for either American or European regions) and the Steam/Xbox version on Funstock for $116.61 USD [which is converted from £89.99 GBP].