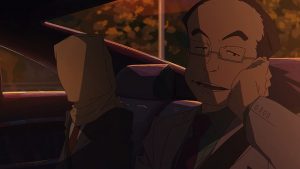 Five episodes in, I’m still not totally sure whether what Great Pretender is doing in its final arc is working or not.  Without any question it’s expanded in narrative scale in a big way, which is perfectly natural for a series such as this one in the last act.  And if any sort of story would suit that it would seem to be the caper flick, where “go big or go home” is more or less the raison d’être.  But I can’t shake the feeling that it’s lost the personal touch to an extent.  I feel a remoteness towards these events that I didn’t feel through the first three arcs. 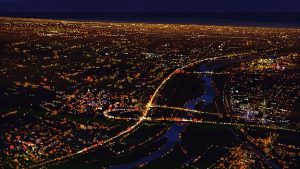 Of course, that may be less a matter of scale than suspension of disbelief.  Again, it seems odd to raise that concern about a confidence thriller, where the ridiculous is expected to regularly begat the sublime.  I can’t say why “Wizard of Far East” so far seems less connected to reality than its predecessors, all of which were ludicrous enough in their own way – but it does, at least to me.  It may be that this story is trying too hard to neatly tie everything and everyone together.  That’s its job in the narrative structure of course, so again, it shouldn’t be an issue.  But my visceral reactions are what they are. 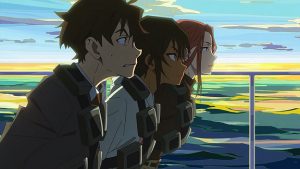 That said, I’m certainly invested and fascinated, as much so as ever.  I hadn’t planned to do double-episodes either yesterday or tonight (they’re work nights after all), but the cliffhangers have roped me in beautifully.  As expected, we’re finally delving into Laurent’s story.  And as expected he has a personal connection to Makoto – through Oz, to be precise.  Just exactly how this ties into the present we don’t yet know, but Oz’ execution on the Suzaku yacht was all part of the scam – and I think we can assume Abby and Cynthia’s were too. 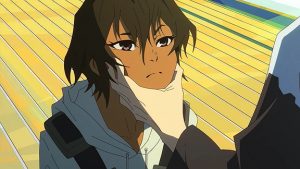 In this sort of story, where things are rarely as they seem to be, the writing has to walk a fine line so as not to make the audience feel cheated.  So far Great Pretender has done that well, but I’m starting to feel a bit impatient with all the rug-pulling that’s going on.  If everything is a scam, nothing ever has any consequences – so why worry about what’s happening at all?  I can only assume Makoto is in the dark about what happened on the boat as he finds himself drawn deeper and deeper into Akemi’s world – which makes Laurent and Oz pretty cruel fucks, if true. 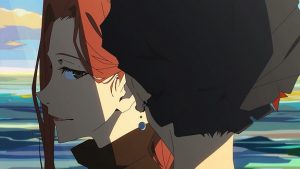 As Liu reads “The Temple of the Golden Pavillion” in Shanghai (rather elegantly used to illustrate the importance of translation) and plots the final showdown with Suzaku, Oz finally decides to let Makoto in on some secrets.  Makoto didn’t seem shocked to see his father alive, so again we’re left to wonder what he knows and what he doesn’t.  But he certainly doesn’t know the origin story of Laurent’s gang, which Oz finally lays out for him (and us).  It takes us to Belgium – Laurent isn’t French after all – where he’s a cheeky bookworm whose dyslexic restauranteur mother is being scammed by a disreputable German (the nature of this isn’t 100% clear to me) called Hugo.  She dies while cooking Brussels Sprouts (perhaps a bit too on the nose there) and sets Laurent down a dark path in life. 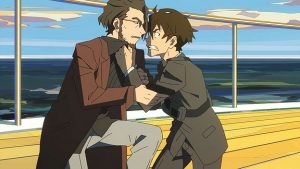 Laurent – now a low-level professional poker player – is saved from becoming a murderer by Dorothy (Komatsu Yuka), a chatterbox confidence trickster who incorporates Laurent’s attack in her scamming of Hugo.  This original core group includes Shi Won and of course Oz, who’s the idea man in the group.  Things progress in natural enough fashion and Laurent eventually falls for Dorothy, who initially professes to want no part of a serious relationship.  The “lone wolf” mantra is the party line, even now, but Laurent is a persuasive guy.  Persuasive enough, in fact, to convince Dorothy to retire and live off her years of big takes. 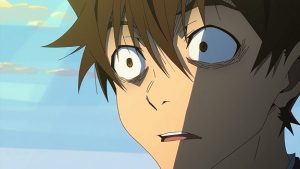 This is all fine and good though I confess Dorothy, with her nonstop blathering and her rather exaggerated character design, isn’t my favorite member of the cast.  But I mostly found myself wanting this flashback to play itself out more quickly rather than really savoring it, because it’s less engaging than what’s going on in the present.  We may not know exactly what happens but it’s not hard to figure out that something goes wrong on the last big job Dorothy insists on, setting off a chain of events that leads us to Tokyo in 2020 at Makoto’s apartment.  I’d just like to get back to that apartment sooner rather than later.

After Sony’s Purchase Of Crunchyroll, Anime Fans Are Worried About THIS