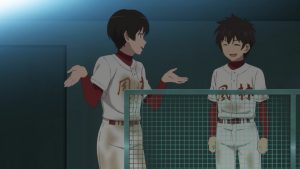 There often comes a heart vs. head moment for me when it comes to sports anime.  I know that, realistically, a certain result is unrealistic – but a part of me wants it to happen anyway.  I tend to lean towards the “head” side when this happens, but the more invested I am in a series the more likely it is that the heart wins out.  And this is one of those cases, because even though I know Fuurin really has no business advancing to regionals, Daigo has busted his tail so hard I really want to see it happen for him. 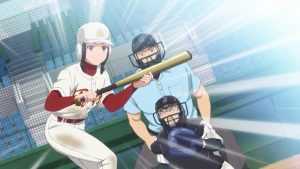 Because I know both Major and baseball as well as I do, I had a pretty strong vision of what the top of the 7th might look like.  In my mind I saw Yayoi being intentionally walked to load the bases for Daigo with the game at 5-4, but I thought Mitsuda might go really bold and have them walk her with the bases loaded at 5-3 (it’s happened, especially in youth ball).  Instead walking her was a no-brainer, as first base was open.  That came after Chisato walked (offering to bunt unsettled Michiru) and Tao singled. 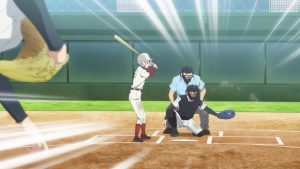 Here’s where baseball minutiae really kicks in.  Tanba made a very unwise call sending Chisato on that play, because her run meant nothing.  Fuurin was lucky and she was safe (despite cramping up), and on the throw home Tao and Chisato advanced to second and third.  Great, right?  Well – if I’m Fuurin I want Sawa swinging the bat, not walking, and if it had been runners on first and second they might have faced her.  But as it stood Oobi had no choice but to walk her and face Daigo.  Of course Daigo is the protagonist, so it pretty much had to play out that way no matter how we got there. 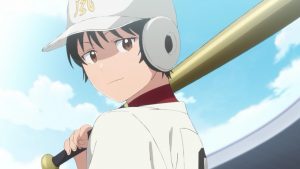 At this point Daigo has no idea his dad has arrived in the stadium, but Michuru does – and that was part of my imagined scenario, too.  Because she’s a Shigeno otaku she decides to show off her Goro form, complete with losing her cap on every delivery.  That’s all well and good – her overhand fastball is a rocket – but Daigo has a chance knowing fastballs are coming.  And he’s taken so many baby steps since we’ve been watching him that they’ve turned into giant strides.  He’s no longer the kid who has to try and bunt every time he faces Michiru because he’s overmatched – he may not be a natural, but he’s made himself into a ballplayer. 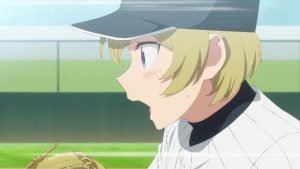 That two-run single was a thing of beauty – as was the animation on Tao’s slide to beat the throw at the plate – and it’s only three outs for the heart to get what it wants.  But the head knows it isn’t going to be that easy, and Yayoi hasn’t thrown a pitch in anger for a very long time.  Predictable she’s gassed and while she dispenses with the bottom of the order, once the Yokohama trio and Michiru are due, things start to unravel.  She plunks Idemitsu and Michiru doubles home the tying run.  She could have taken third on the throw, but doesn’t – because she knows if she had, Daigo would have walked her two remaining comrades and faced a zaku.  As it is, they pretty much have to face Uozumi-kun (though walking him too would have been bold, and probably smart). 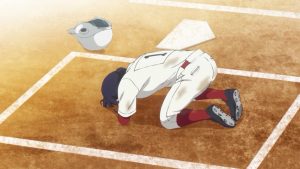 Meanwhile, Goro has found Kaoru and Fujii-san in the stands, and we learn a little about what he’s been up to.  That is, being a coach, as apparently he’s run out of countries that will pay him to play.  Dude loves baseball more than he loves his wife and kids, sadly – there’s no two ways about it.  But Goro does at least give credit to Daigo for inspiring him to coach when he was feeling depressed about his career ending.  And more importantly, he shoots down Fujii and Kaoru (who really should know better) when they try and pass off Daigo’s improvement as genetics.  It’s anything but, as anyone who’s watched him would attest – nobody could have earned his success any more inarguably than Daigo has.

But there’s still the matter of the game at hand, and it looks rough.  Yayoi was indeed injured – her elbow, predictably – though her doctor has told her it’s healed sufficiently to pitch.  I believe her when she says she’s tired rather than injured, but this is still a testament to the fact that she’s come to give a damn about this team against her will – and I think that can all be laid at Daigo’s feet.  How could anyone look at how much he’s done with so little given to him naturally and not feel guilty about mailing it in, especially if you’re ultra-talented yourself?  It looks grim for Fuurin – who will pitch, even if Sakura makes that catch?  But as I said this game is as much about the way Fuurin loses it as anything, and I think the foundation has been laid for a successful next stage.