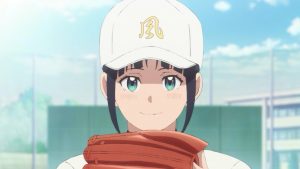 There were a couple of major bombshells (no pun intended) dropped in this week’s episode of Major 2nd (and these qualify fully as bombshells, especially the second).  One of them I predicted, but one of them caught me completely off guard.  As I noted last week I had a suspicion about who the Tsujidou head coach would be, and that turned out to be correct.  He was indeed the prospective head coach of Fuurin who bailed on them, as last week’s episode hinted – and he certainly seems to have walked into a more immediately attractive situation.  As to the other thing, I certainly didn’t see that coming. 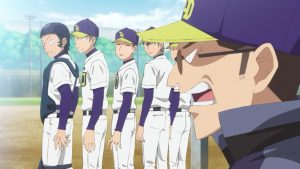 As it turns out, the Tsujidou coach is Mario’s father.  There’s another Kunitomo on the squad as well, Mario’s smaller big brother (it would be great if his name is Luigi).  Father and son have something of the same manner.  Mario is quite apologetic to Daigo about the way Yoneyama (the assistant coach) has treated the Fuurin team, and when Coach Kunitomo arrives he’s very polite as well.  Politeness and arrogance are not mutually exclusive, and I suspect coach and pitcher have both, but the father doesn’t give us any immediate reason to dislike him. 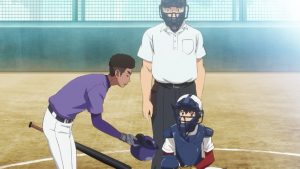 As it happens Kunitomo has ordered Yoneyama to turn over the field, as the A-team has finished their game early (slaughter rule no doubt).  He’s prepared to cede defeat but not to accede to the prior agreement for a rematch if Fuurin won, and he orders the boy keeping score to falsify the box score to not look so pathetic.  When the big boys arrive the head coach immediately apologizes and orders his A players to take over, which means Fuurin at least gets a game.  But the impact of the new blood (at least one additional foreigner among them) is explosive to say the least, and Sakura is immediately roughed up both physically and mentally. 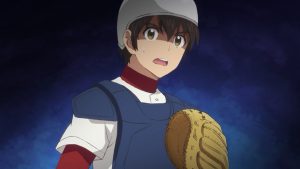 It’s Akira who has the most personally at stake here, of course.  It was Kunitomo-san who screwed him over – and indeed, screwed the whole Fuurin baseball program, but Akira got the worst of it.  He’s keen to take over on the mound but Sakura is keen to try and least gut out the inning.  The problem is, Tsujidou’s hitters are simply too good for her stuff.  And this is symptomatic of a larger issue that Mitsuda is going to have to face head-on sooner or later or risk losing all verisimilitude with Major 2nd – at the highest level, a team made up mostly of girls simply cannot compete on even terms in junior high school baseball.  It’s really only Sawa who can (as Kunitomo himself notes). 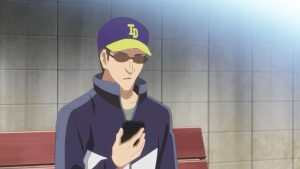 Akira manages to get out of the inning, thanks to a great catch by Chiyo (who’s earlier misplay led to the six runs that scored).  And then Mario begins to display what are apparently very familiar patterns on the mound – overthrowing, ignoring his catcher, generally getting too worked up.  He is a first year after all, and his father seems content to let him twist in the wind, hoping he’ll learn from it.  Eventually the bases are loaded and Sawa just misses a home run – though Fuurin loses a run when Chiyo forgets how to tag up.  Kunitomo doesn’t send for a relief pitcher though, but a relief catcher – Sakaguchi, who’s inputting game data in the computer lab. 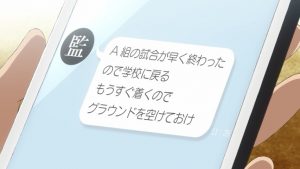 When did I know?  Well, as soon as I heard the voice, certainly, but I seem to think I suspected as soon as we saw the boy at the PC from the back.  Names can change, after all, especially when a child is in the custody of the mother after a divorce.  Having Hikaru back is a huge shakeup for Major 2nd, of course.  But this was not a happy reunion, even in the context of happening in the middle of a game.  Something felt off, right from the start, and that feeling only got worse after Hikaru and Daigo started talking. 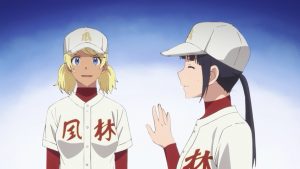 What exactly is the deal here, I wonder?  Hikaru not saying he was back in the area (and had been for a year) comes off as pretty rude to Daigo, frankly.  But the way Hikaru says he can no longer pitch “because of that injury” fills one with foreboding.  Despite his words at the time of their previous meeting, does Hikaru now blame Daigo for what happened?  That would really suck, honestly – especially since while it was an accident and not really anyone’s fault, in baseball terms it was- well, Hikaru’s fault.  I’ve come to feel so proud of Daigo for the way he’s grown up, and even though it would be character development, it would hurt a lot to see him regress because of a cruel emotional blow like that. 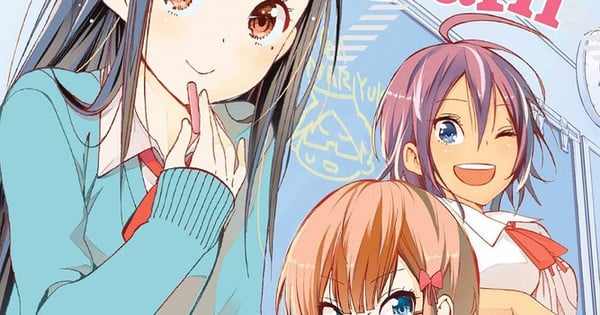