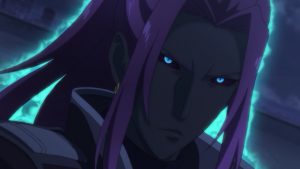 It’s status quo for Noblesse after this episode, which is mostly a good thing.  That is to say it’s solidly entertaining, yet doesn’t lend itself terribly well to blogging.  That’s a bit of a vexing situation but it is what it is – the very quality that makes the series appealing, it’s straightforward openness, doesn’t leave much for me to do.  If anything is changing, maybe it’s that the animation is getting better – closer to the OVA level.  It’s not vintage Production I.G. quality by any stretch, but it appears the production was saving budget for the battle episodes. 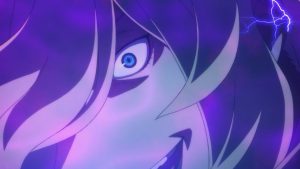 Battles episodes the last two certainly have been, wire to wire.  Things were a little more streamlined this week in terms of the players, but the battles themselves were bigger.  The moment of truth comes for Tao, as Krantz orders him to sacrifice himself so he can power up to face Rai.  Krantz can tell from the opening salvo that Rai is an order of magnitude apart from the zaku he’s been fighting, but he has no idea of the true size of the gap.  Meanwhile Frankenstein and Takeo are going at it on the roof, and Takeo’s veiled threat against Rai prompts Frankie to do something he’s apparently been ordered not to – unleash his full power. 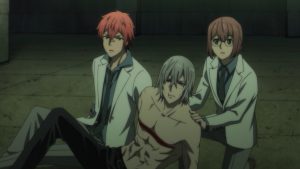 It’s these four in the ring, basically, as pretty much everyone else (Seira finishes off – though not necessarily kills – Hammer quickly enough) has been sidelined.  And in truth neither of these fights are much of a fight, as the class difference between the true immortals and the modified humans could hardly be more clear.  The only real question is who’s going to be left alive in the end.  Frankenstein seems to have no qualms about killing Takeo, but Takeo’s final request to Seira stays his hand. 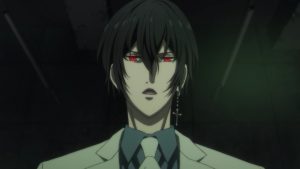 Meanwhile Manabu begs Rai to save Tao, which Rai rather sweetly tells him is unnecessary – he need only ask.  Rai has been quiet since the premiere but he certainly lets loose a bit here, revealing very impressive bloodbending skills (“Blood Field“).  I can see a potential tripwire here in that Rai seems to be basically infallible, so great is the gap between he and anyone else – and that can be a serious narrative problem in a battle series.  But maybe there’s some limitation or weakness (perhaps coughing up blood is a symptom) we haven’t been told about yet. 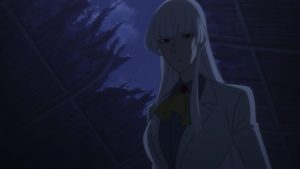 With that – and Krantz presumably demised – things return to domestic mode.  M-21 and Takeo heal up while the humans sleep it off, and eventually Rai reveals to M-21 his true form – which seems to be a werewolf.  Tao digs up the information on M-21’s comrades but the records have been destroyed, and he also tells Takeo that his sister is a fake, memories implanted by the Union.  Eventually M-21 asks Frankie to let Takeo and Tao move in, and the house party takes it up a notch.  That’s a fun prospect, but I think what remains to be seen is what the endgame is for Noblesse – what’s the ultimate purpose of this group’s fight?