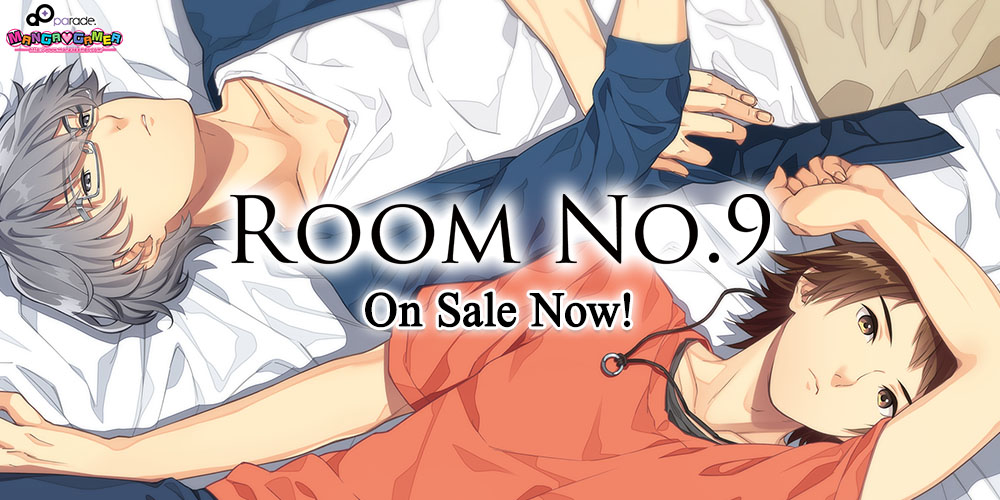 Today on the blog, we have an editor’s corner from Sharpestrose!

Room No.9 has a simple premise: friends Daichi and Seiji are kidnapped while en route to a holiday and held captive in the room of the title. They are forced to complete assigned tasks in order to earn their freedom, with a mixture of violence and sexual acts ahead of them.

Because Room No.9 has such a tight focus, it’s a high risk/high reward kind of game. The high risk comes from having the entire story hinge on only two characters and if either of them come off as uninteresting or unconvincing, then the whole thing falls apart. Luckily, in this case, that high risk pays off with a high reward because Daichi and Seiji are both compelling, rounded characters and the game shines because of that fact. 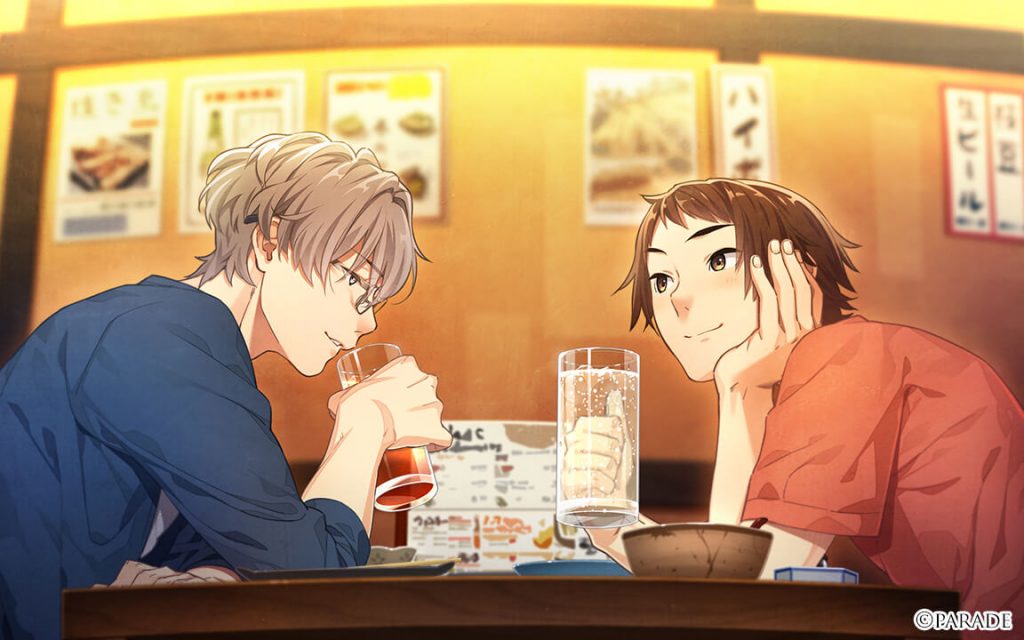 Daichi is bright and happy-go-lucky, partly because it’s his natural temperament and partly because he wants those around him to feel cheerful. He’s very open with his feelings, though not necessarily especially self-aware about them. It’s from his perspective that we observe the events of the story as they play out.

Seiji is more reserved then Daichi, keeping his thoughts and feelings to himself a lot of the time. This makes the punishments aimed at him especially humiliating because while Daichi’s personality isn’t especially fazed by the idea of undergoing physical harm, the stoic Seiji is forced to submit to degrading sexual debasement. 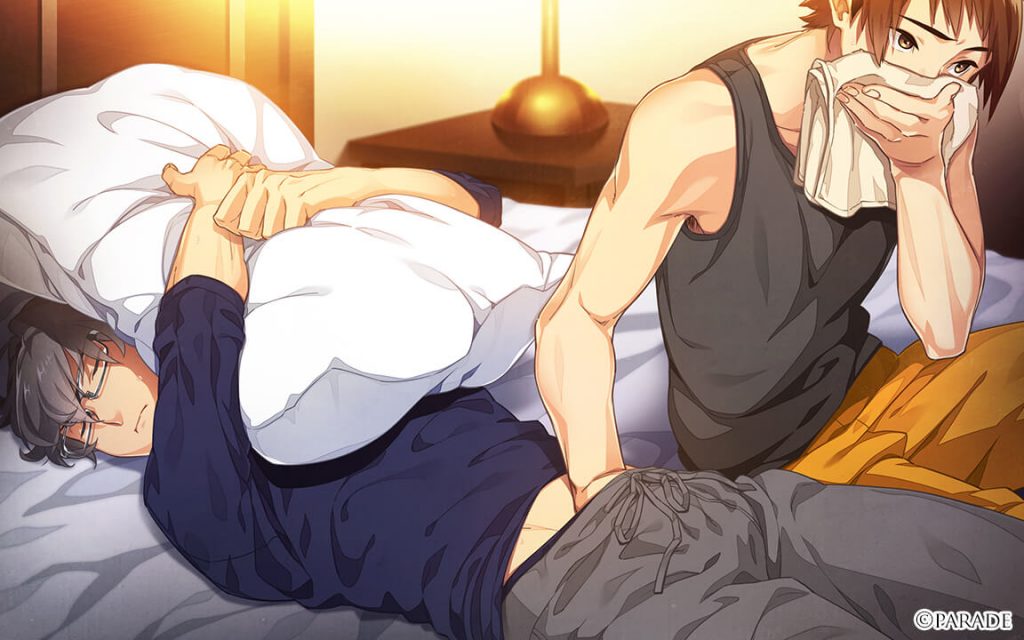 As well as caring about them individually, the player becomes genuinely invested in the friendship between Daichi and Seiji, learning the history of their bond as the game progresses. This investment is super important in making the stakes seem real as they undergo their ordeal, because it’s not just their lives that are at stake, it’s their friendship as well, whether it survives or not is one of the core tensions of the game. 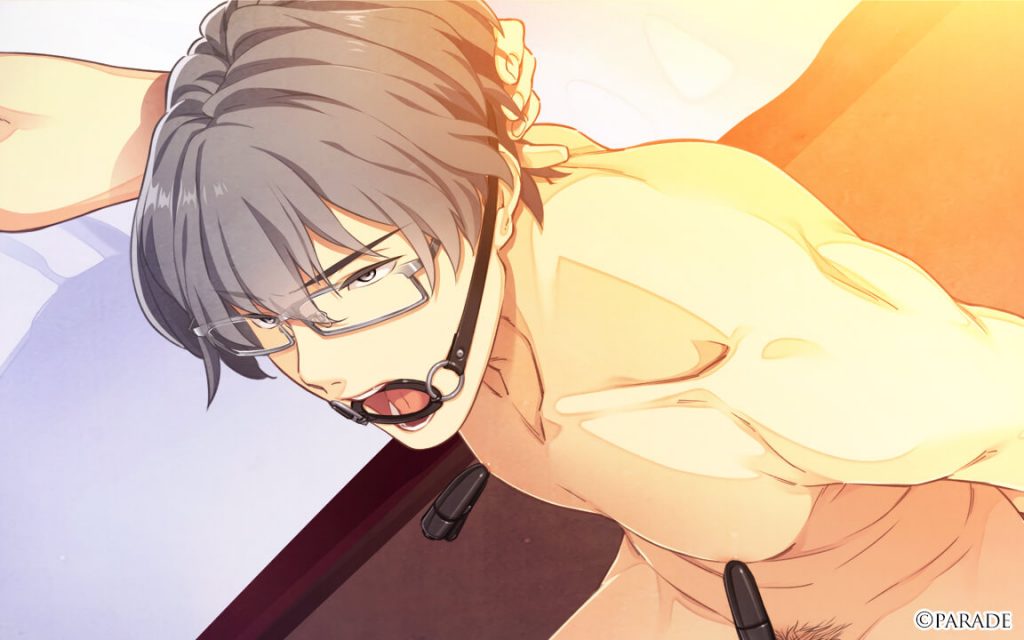 Room No.9 has been described as the (BL Euphoria) and, while Room No.9 has the aforementioned narrower focus in its content than Euphoria (made by Parade’s sister company ClockUp) does, the comparison is pretty warranted. Like Euphoria, Room No.9 deals with the characters being forced to perform increasingly extreme fetishistic acts. Luckily for the squeamish, the game provides on/off toggles for elements such as blood, bodily waste, body hair, and even whether Seiji will leave his glasses on or take them off before each explicit scene.

Compared to titles like Parade’s earlier No, Thank You!!!, Room No.9 may seem at first glance to be a much smaller experience, as it doesn’t aim to go as broad with its plot or cast of characters. But what it lacks in breadth it makes up for in-depth, giving the player an unnervingly claustrophobic experience with Daichi and Seiji as they undergo their ordeal.

Technically, the game is excellent, with polished professional assets that make it a joy to play. This is one of the reasons I’d recommend it to any BL fan, despite its oftentimes intense subject matter, we just don’t get games this slick in the genre nearly as often as we should.

Room No.9 is an experience that sticks with the player long after all the endings have been achieved, and I hope you’re brave enough to give this title a try because you absolutely won’t be disappointed!

Room No. 9 is now available on MangaGamer.com and Steam!