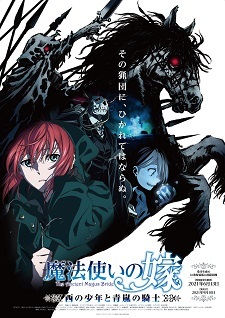 Production company Twin Engine unveiled a new original video anime trilogy for Kore Yamazaki's Mahoutsukai no Yome (The Ancient Magus' Bride) manga on Wednesday, subtitled Nishi no Shounen to Seiran no Kishi (Boy from the West and Knight of the Blue Storm). The special edition of volumes 16–18 will bundle the OVA episodes, with the 16th volume shipping on September 10. Pre-orders for the volume will be accepted through June 13.

Synopsis
The story takes place shortly before Cartaphilus took a nap and Chise became an auditor at the academy.

Elias and his friends help Chise prepare for the academy, where in the middle of everyday life, Spriggan visits the mansion on a spooky horse with the words, "The appearance of the ghost hunting association is unusual this time."

Gabriel, an ordinary boy who just moved from London, was bored of his environment of parting with friends, being in an unfamiliar location, and everything else. Sitting by the window and glancing beyond, he spotted a purple smoke and decided to chase after it, looking to escape his boredom. Though it should not, the world of the boy begins to converge with the wizards, who live on the other side behind a thick veil. 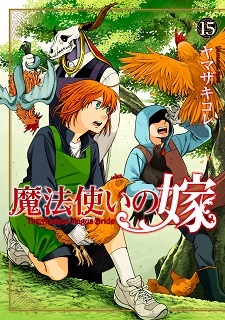 Yamazaki began drawing the magic fantasy manga, also known by its short title Mahoyome, in Monthly Comic Blade in November 2013 before transferring it to Monthly Comic Garden due to the former ceasing publication. Mag Garden simultaneously serializes the manga on its MAGCOMI website and shipped the 15th volume on Wednesday (pictured).

Wit Studio produced a three-episode prequel OVA titled Mahoutsukai no Yome: Hoshi Matsu Hito (The Ancient Magus' Bride: Those Awaiting a Star), which was was bundled with the sixth, seventh, and eighth volumes from 2016–2017. A 24-episode television anime aired in Fall 2017, adapting till the ninth volume.

Seven Seas Entertainment licensed the manga in English in October 2014 and published the 13th volume last October. The 14th volume is planned for an April 27 release.

Mahoutsukai no Yome: Nishi no Shounen to Seiran no Kishi on MAL