The Eminence in Shadow Novel 1

The Eminence in Shadow has a great premise: what if an ordinary otaku who was obsessed with becoming the shadowy mastermind behind a secret hero group was reborn into a fantasy world in need of one but thinks he made it all up? It borrows elements of There Was No Secret Evil-Fighting Organization (srsly?!), So I Made One MYSELF! and gives them an isekai twist, along with the fact that the protagonist of Hagane Kurodome's series creates his own enemies, but Daisuke Aizawa's Cid has built an organization for good that he has zero clue is actually needed. It's a fun riff on the age-old theme of imagination games going way out of control and it ties in with the both the concept and execution of the isekai genre very well.

The problem arises when it comes to the question of whether or not the humor works for you. This is largely an issue because humor is among the most (if not the most) subjective of genres; what one person finds hilarious can be deemed mean and unfunny by someone else. It's much more a problem in the prologue to the main story, which is both a plus (it isn't repeated elsewhere in the novel) and a minus, as it's the first impression a reader gets. The specific point is how Cid comes to be reincarnated in his fantasy world in the first place: he's been “training” himself to develop extra-sensory powers by repeatedly bashing his head against a tree, and in his damaged state, thinks the headlights of a car are the manifestation of his magic powers and runs right into his death. Since this variety of self-harm can be a manifestation of several different mental health disorders, its use as a prop for comedy purposes may not sit well with all readers, and can indeed be very uncomfortable for some. The humor stops being an issue (at least to this degree) once Cid is reborn, so it isn't necessarily a deal-breaker for readers interested in the book, but it is something to be aware of.

Fortunately for Cid (and readers), once he's able to grow up a bit in his new life, he realizes that both sword and sorcery are the name of the educational and fighting game in his world. He embraces this whole-heartedly while still making an effort to remain in the shadows – his goal is to be the shadowy overlord, not the public face of crime-fighting, after all. To this end he makes himself as over-powered as possible while presenting a perfectly ordinary appearance to the world at large; he thinks of it as remaining a background character while others take on the role of protagonist. His one problem is that he thinks there aren't any nefarious cults or other organizations for him to plot against…so in tried-and-true fashion, he decides to just make one up and pretend to fight against it anyway. After all, for Cid his new world feels like the games he played back in Japan, so in some ways he just sees his rebirth as an extension of that. He's able to recruit members of his band when he discovers that he can basically resurrect girls with a particular curse that sounds like “horrible misconceptions of leprosy: the magic version;” he tells them that the curse was the fault of the cult he thinks he made up.

As it happens, he didn't make it up, although there's no word yet as to whether or not his game somehow led to the formation of the group, which would be an interesting twist. But he goes through the entirety of the novel still operating under that assumption, even when the cult begins attacking those near to him and his school. This is a little hard to believe, but Cid has spent two lifetimes worth of years thinking that he's just playing some sort of elaborate game, and he knows perfectly well that there are still monsters in human skin wandering around doing evil things, so while it's difficult to stomach, it isn't impossible. For Cid the most important thing is that he's getting to use the skills he's spent so much time honing, and hey, if he gets to take down some bad guys, it doesn't really matter if they're part of his “made up” group or not.

The result is that there's a sense of disconnect between Cid's narration and other characters' point of view. It works fairly well for humor, with some pulling it off better than others and an interesting variety of misunderstandings arising. This is largely a combination of Cid amassing a harem he's totally unaware of (and mostly uninterested in) and the villains assuming that Cid knows much more about them and their operations than he actually does. The coexistence between these humorous elements and the often-gruesome descriptions of battle isn't always comfortable, but it works well enough. The violence mostly consists of limbs being lopped off, heads flying in sprays of blood, and an overuse of the word “bisects,” which becomes noticeable very quickly. Interestingly enough, Tōzai's illustrations don't cover the gore at all, being much more interested in pictures of the lovely ladies of the book. These are attractive, if not a little heavy on the dark space, and there are some nice color images included in the front of the hardcover volume.

The Eminence in Shadow doesn't entirely live up to its premise, presenting some linguistic contradictions (if it's a Medieval world, why are they wearing loafers and modern school uniforms?) and a few elements that are more mean than funny. It is, however, entertaining enough to be worth reading, especially if you enjoyed There Was No Secret Evil-Fighting Organization (srsly?!), So I Made One MYSELF! or other similarly spoofy works. 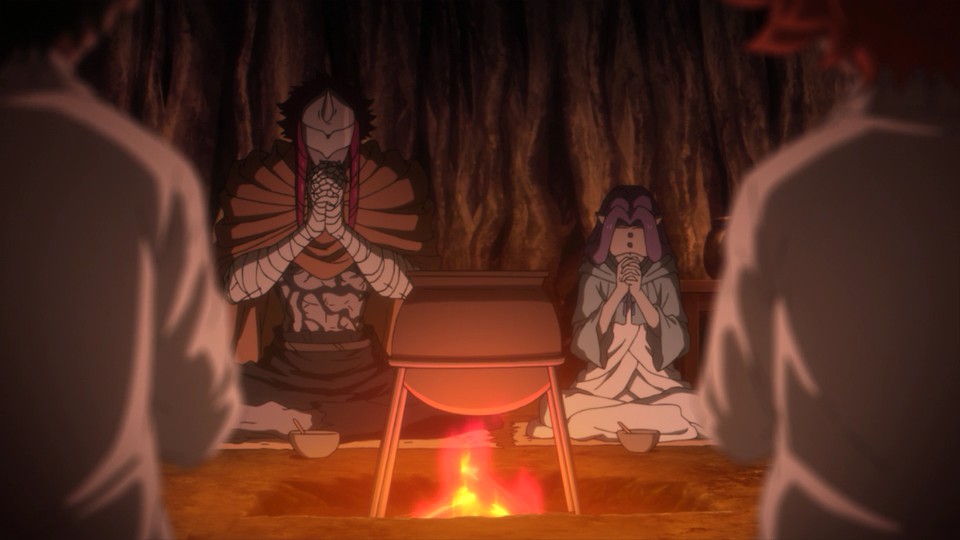