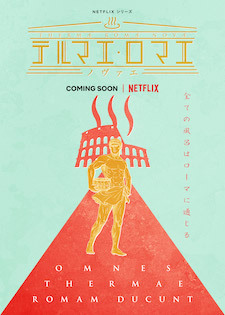 Tetsuya Tatamitani (Africa no Salaryman) is helming the series at NAZ (Hamatora The Animation) and Yuuichirou Momose (Magatsu Wahrheit: Zuerst) is penning the script.

The anime series is based on Mari Yamazaki's Thermae Romae historical comedy manga. Yamazaki serialized the manga in Comic Beam from January 2008 until March 2013. Enterbrain published the manga in six volumes between November 2009 and June 2013.

Yen Press licensed the manga in English in April 2012 and published it in two-in-one hardcover omnibuses from November 2012 to February 2014. The manga has also been published in multiple foreign languages.

DLE produced a short television anime in collaboration with Gonzo which aired in Winter 2012.