This Week in Games - Scalpers' Paradise

Hey hey! Welcome back to This Week in Games. It's a little bit of a light news week, which is probably for the best because, as you read this, I'll be in the hospital undergoing surgery. Nothing too major, and I should be back home for the weekend, but surgery is still not very fun in general! At least I have a bunch of Switch and PS4 games to keep me happy while I'm recovering – I've been specifically saving NieR Replicant for the weeks post-surgery when I'm a bit less mobile. Depending on how things go, there may or may not be a fill-in for TWIG next week. Just a little heads-up!

The folks over at ININ Games were nice enough to send me something to help me feel better, though: a care package filled with Wonderboy: Asha in Monster World goodies! I'm definitely hyped to check out the remake dropping later this month.

Also, I just finished my SaGa Frontier Remastered review, so look for that to be posted soon. That was a fun review to write, and I hope you'll enjoy reading it, too!

So let's see what's in the news this week, shall we?

THE PS5 SHORTAGE IS LIKELY TO CONTINUE

By now you've probably heard that Planet Earth is suffering from a semiconductor shortage that is affecting everything from cars to medical equipment to next-gen consoles. We're about 6 months into the existence of the PS5, and the consoles (along with the Xbox Series) are still a pain in the ass to get without paying some scumbag on eBay a few hundred dollars above MSRP. Unfortunately, things aren't going to get easier anytime soon.

During a report of its fiscal year 2021 results, Sony mentioned that they've sold 7.8 million PS5s so far. It sure doesn't seem like it, given that finding one to buy in person or online is like capturing a unicorn. The strong demand is likely to ensure that PS5 stock is going to remain hard to find in the near future. In the words of Hiroki Totoki from Sony, “I don't think demand is calming down this year and even if we secure a lot more devices and produce many more units of the PlayStation 5 next year, our supply wouldn't be able to catch up with demand.” In other words, stock of PS5s is likely to remain scarce until at least 2022. As much as Sony wants to outpace the 14.8 million global sales of the PS4 in its first year, reality might keep that from happening.

This news makes me worry that scalpers are just going to get more aggressive with bot-driven buying and hoarding as more games release and people get more desperate to play the new stuff. Microsoft hasn't said anything more about continuing Xbox Series shortages, but given that much of the problem lies in the semiconductor shortage, they're likely in the same boat. At least there are still plenty of great current-gen games releasing this year to tide us over, right?

This is another one of those announcement-of-an-announcement news stories, but rumblings are that it's going to be something pretty big. Square-Enix announced via its social media channels that there is going to be a Dragon Quest-related livestream starting on May 27th at 12:30 PM JST (about 8:30 PM Pacific time and 11:30 PM Eastern time). The presentation will focus on the series’ 35th anniversary, and will also feature the “upcoming line-up in the Dragon Quest series,” as seen below.

Interestingly, this broadcast will have live English interpretation onhand – a first for anything Dragon Quest-related – which is leading some to think that this could portend an announcement of great importance to the series, like a new numbered entry. It has been almost four years since the Japanese release of Dragon Quest XI, so we're about due for a look at a potential Dragon Quest XII. Of course, the description states that there's a “line-up,” so there are bound to be a few spin-off titles in the works. Square-Enix has been putting a lot more of a global emphasis on the series in the last five years, so I'm hoping for the first-ever Dragon Quest game with a worldwide simu-launch.

SEGA HAS A SUPER GAME IN THE WORKS

Sega-Sammy just published their fiscal year 2021 results presentation online. It's available in English as a PDF, and I actually do recommend checking it out, as there's some interesting stuff in there. (Not the pachinko stuff, though you can scroll right on over that.)

Console and PC profits are up while arcade profits are down, which is no surprise given the state of things for the past year (and Sega mostly selling off their arcade management operations). They're rather bullish on their slate of upcoming titles for the 2022 fiscal year, which includes heavy hitters like Lost Judgment and Shin Megami Tensei V, and expect Phantasy Star Online 2 New Genesis (which is having a beta test this weekend!) to perform well in the free-to-play market.

There's a big emphasis throughout on building and strengthening IPs into global brands, and specifically states the planned global simu-launch as an example designed to further establish the Yakuza/Ryu ga Gotoku brand as a global powerhouse. The goal, apparently, is to create a SUPER GAME within five years. Yes, that's the exact wording. What it is, exactly, is only known to those within Sega – though, looking at this slide, it's likely to be made at one of Sega's European studios. I tend to underestimate the non-Japanese-made Sega stuff since it usually doesn't spur my interest much, but stuff like the Total War series and Football Manager have consistently delivered stellar sales, so top brass at Sega clearly have confidence in their outside teams.

Perhaps of most interest to old-school Sega nerds like me, though, is the plan to analyze and utilize old IPs like Jet Set Radio, Altered Beast, Shinobi, Virtua Fighter, and Fighting Vipers.

Okay, they didn't specifically say anything about Fighting Vipers, but I choose to believe. Anyway, these old favorites will be looked over for a potential remaster-remake-reboot approach. Whether Sega will do that themselves or continue to license these IPs to outside developers and publishers (like with Rez Infinite, Panzer Dragoon Remake, Streets of Rage 4, and so on) isn't specified. I would hope the sales and fan reception of Streets of Rage 4 would convince them that there are lots of studios filled with fans who grew up on Sega classics who can do these series justice.

King of Fighters XV trailer time again! This one's another longtime fan favorite: Leona! We already knew she was in the game from the initial reveal trailer, but now we get a closer look at her arsenal of skills in action!

Also, this weekend marks the last Guilty Gear Strive online beta test, and the first time that players will be able to try out Anji Mito and I-No's Strive incarnations. Arc System Works has been posting introductory videos to help folks dive into learning the GG Strive cast, and they added two more to give folks a closer look at the final pair of fighters:

My Twitter timeline is currently filled with folks despairing that the final GG Strive beta and the PSO2 New Genesis beta both happen to be on the same weekend. I'm going to be doing… neither, because I'll probably be curled up in bed with my Switch and a cat recovering, but I'd probably go PSO2NG only because the full release of Strive is just a month away now. But I get it: you need to start that labbing early to get the edge. Being a nerd means tough choices sometimes.

That wraps things up for this week. As always, thanks for reading! I'll see you all again possibly next week, if not, the week after that. Take care, have fun, and keep on gaming! 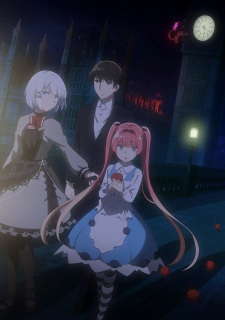