I wouldn’t have thought it was possible, but Nasa and Tsukasa are even more crazy adorable in anime form.  Not surprisingly an episode focused on these two is a fair bet to be among the series’ best, and this one fits the bill.  There are other elements that go into making Tonikaku Cawaii work (some of which we’ve seen, some not yet) but ultimately the show’s appeal comes down to these two.  I’m strongly of the opinion that this is a series that gets better the more it keeps things simple. Of the supporting cast we’ve met so far I find Kaname less distracting than the ojousama and the maid duo, and she does serve an important role in the story.  She’s often the one to send the shockingly sheltered Nasa off on tangents by educating him in the ways of the world, and so it is here.  Nasa is a classic example of a book-smart person with almost no street smarts – he doesn’t even know (until Tsukasa teaches him) that wedding and engagement rings are two different things.  But rings are a thing, and as a married man it behooves him to know something about that. Kaname’s cocksure lecture about how men are only kidding themselves about their wives’ not wanting to be pampered may be a bit sexist, though perhaps a grain of truth exists in it too.  I’m personally of the opinion that spending three months salary on any ring – or a wedding, for that matter – is insane.  It’s a triumph of marketing BS, like  KFC for Christmas in Japan and Valentine’s Day.  But it is what it is, and we live in the world we live in.  Kaname isn’t wrong to clue the clueless Nasa in about this, though the end result is a bit complicated. The thing about Tsukasa is, she genuinely would rather save money or spend it on practical things than blow it on “tiny rocks” – but that’s not to say she doesn’t see the appeal.  She’s just a practical girl, and doesn’t want to see the guy she loves screw himself over for something unnecessary and purely symbolic.  And Nasa is insightful enough to realize the real symbolic importance of wedding rings.  They represent something important – they just shouldn’t cost enough to financially ruin you.  These two are so well-matched, and this episode is a perfect example of that. 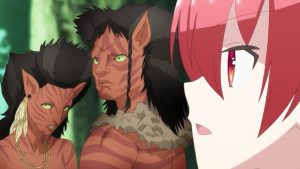 Tsukasa, realizing her boy really has his the bit in his teeth about this, cleverly decides to take him to Omotesando (Tokyo’s most tony shopping district) to show him just how impractical his wishes are.  She takes him to “Honey Winston” (of course the real-life Harry Winston) where he’s treated to displays of rings costing the equivalent of $35-60,000.  But to her horror Nasa buys the salesperson’s spiel hook, line and sinker, and she’s only just able to drag him to safety before he ruins both their lives.  The kid knows everything about everything academic, but has barely a whit of common sense. The eventual compromise – $320 for two rings in Okachimachi (Tokyo’s black market district during the U.S. occupation) really is the best thing for all parties.  Usually this kind of straightforward, earnest romance would risk being monotonous, but with these two is just seems to work.  Each of them are quirky enough in their own ways (Tsubasa reveals herself to be a Hollywood blockbuster fanatic, for example), and as peculiar as its genesis is the affection between them is totally genuine.  They make Tonikaku Cawaii sing, and an episode like this one is practically an opera.

Kiyo in Kyoto: From the Maiko House Anime Also Streaming on Crunchyroll