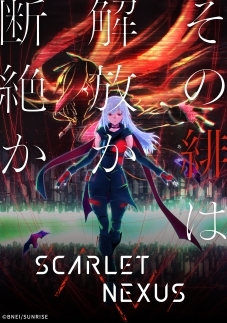 Bandai Namco Arts opened an official website for a television anime adaptation for their upcoming Scarlet Nexus action role-playing game on Thursday, revealing the main cast, a teaser visual (pictured) and a teaser promotional video. The anime will be produced by Sunrise.

Synopsis
Solar calendar year 2020: grotesque organisms called Others have begun eating people. To take down this new enemy, the Other Suppression Force is formed. Saved by this elite team as a child, psychokinetic Yuito withstands the training to enlist. On the other hand, prodigy Kasane was scouted for her abilities. But Kasane’s dreams tell her strange things, dragging the two into an unavoidable fate. (Source: Official site)

The video game is currently being developed by Bandai Namco Entertainment and is set to release on June 26 for PC, PlayStation 4, PlayStation 5, Xbox One, and Xbox Series X and Series S.