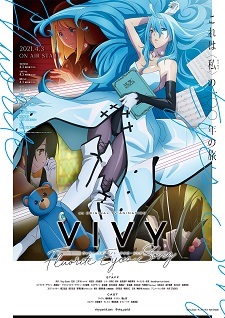 Voice actress Atsumi Tanezaki (Mahoutsukai no Yome) is starring as the titular character Vivy, the first autonomous humanoid diva A.I in history. Jun Fukuyama (Ansatsu Kyoushitsu) is playing Matsumoto, an A.I that comes from 100 years into the future and partners with Vivy to destroy A.I.