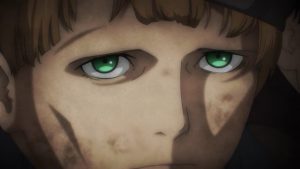 There’s been some discussion since Episode 2 about just who the “patriot” in this series’ title is. I think after this week’s follow-up it seems very likely that it refers in fact to Albert, not William – though it’s too early to say for sure, and it may not even matter all that much. The events here indicate pretty clearly that we’re about to head into the more “familiar” (i.e. Holmsian) part of the story. And there’s no question it’s William who occupies the role we traditionally associate with Professor Moriarty in the Doyle universe. 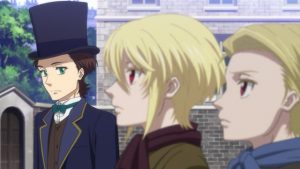 There’s a certain irony in the fact that this all starts with an act of noblesse oblige, which is what passed for altruism among the Victorian upper classes. The matriarch of the Moriarty household can have had no idea of just how right she was when she protested at the danger this pair of urchins presented to the family. These people are caricatures to an extent that I don’t think flatters the storytelling, especially William (the original) and the mother – though of course monsters like them certainly did (and do) exist. 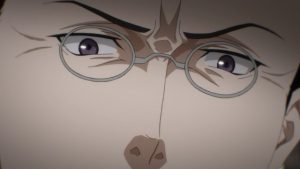 Of more interest – and perhaps more vexing – is Albert. One can’t help but wonder how a young man in his position would have come to hold the views he does. It seems very unlikely Albert would have been exposed to revolutionary thinking at the schools he attended, or from the friends he was allowed to associate with. How did this boy come to loathe his family so much that he would be willing to murder them in the name of social upheaval? It seems unlikely, even as loathsome as they are. Perhaps he was simply born with an overactive sense of justice – a one in a million shot given his genetics and background. 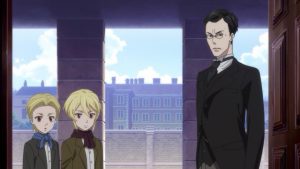 What can’t be argued is that his family is pretty awful, especially his brother – who’s cartoonishly so. A little more nuance wouldn’t have come amiss here in my view, but William being as venal as he is certainly allows the story to steam ahead quickly. We’ve already seen how ruthless William (the adopted) could be in pursuit of justice as he sees it. But truly it’s Albert who comes off as the sociopath here, because he sees in William the opportunity to free himself of the curse he views his family to be. 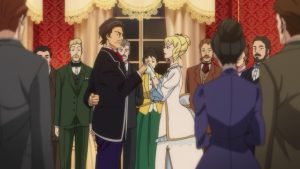 There’s no quarter asked and none given between these two, and not a qualm between them. William knows he’s been invited into the Moriarty home for a reason, and he suspects what the reason is. For William this is a test to see how serious Albert is about what he says he wants to accomplish – for Albert an opportunity to make the impossible possible. As vile as they are, what Albert does – under William’s direction – is brutal. The twist of that stake in his brother’s belly was not subtle in its symbolism. Albert was enjoying himself. 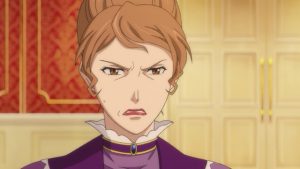 What of Louis, the third wheel on this unlikely cart? We’ve yet had little insight into his nature, either as boy or man. We know he’s loyal to his blood brother, we know he’s been suffering from some sort of illness that Moriarty’s money was used to treat via surgery. And we know from his actions in the aftermath of the fire that he’s no shrinking violet. We know he supports his brother absolutely, and in the aftermath of the fire he seems to consider his stepbrother worthy of his loyalty as well. But does he bring anything to the table beyond that – a perspective on what those two believe that’s distinct from theirs? Maybe – but not that we can point to as yet. 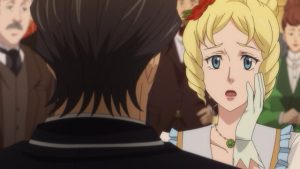 Now the story proper begins, seemingly – we’ve had an anime-original introduction to the premise, and a canon origin story. Durham is a place that will be familiar to any Doyle fans – Moriarty is said to be a professor at Durham University. That means Holmes and his circle (though they spend most of their time in London) are likely to make their entry into the narrative very soon. And it’s their role that remains the most intriguing mystery in Yuukoku no Moriarty. To say that the moral outlook of this series is cloudy is an understatement, and that’s not something I expect to change when Holmes becomes part of the story.